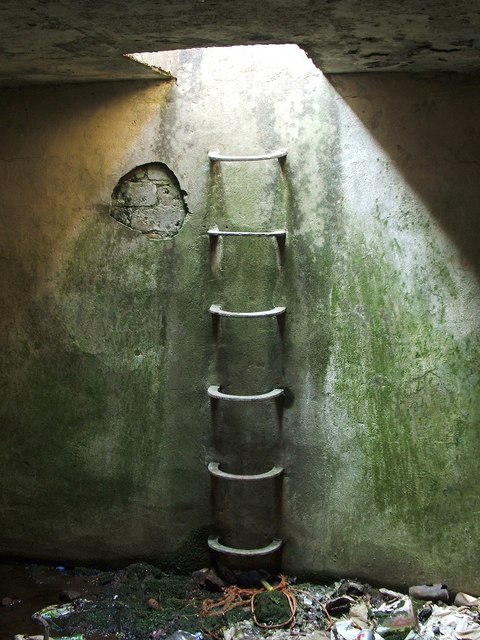 Drew grabs his backpack, filling it with water, cans of peaches and others types of food. He takes in a deep breath, he glances around the basement and he grabs the gun. He checks it, loading it slowly and he keeps himself thinking of what could happen if he ever left the basement but he knew that he had to run to safety since he did not have his mother or step-sister anymore. Drew hears footsteps upstairs as he pauses, the heavy footsteps causes dust to fall all around him and he bites his bottom lip. The screeches of the creatures above that were once his mother and step-sister echoes in his mind, he steps back from the makeshift table as he runs his fingers through his faded silver hair. He looks at his watch, the time said 2:30 pm and he quickly zips up his backpack. He slips on the straps on to his shoulder, he holds the gun and he goes to the second door that lead to his room.

Drew opens the door to his room, shutting it quickly and he grabs the blanket. He knew his plan as he hears the horrible, alien screeching and he grabs his lighter. He heads straight to the basement door, his thumb makes the lighter sparks to life as the flame flicker. He opens the basement door with his foot, throwing his lighter down and begins to run towards the front door. He trips over a rocking chair, he hits his face against the wooden floor and he crawls to the door. Drew notices the sky was still dark with a tiny bit of light, he opens the door and feels a slimy hand on his ankle. He screams out in pain as he feels needles dig in to his ankle, he aims the gun towards his ankle and shoots the slimy hand. Whatever was gripping his ankle shrieks, black fluid dripping across his ankle and he crawls out of the door. He slams it tightly, noticing tall creatures that seem to be moving slowly and he goes into the garage. He grabs his bike, putting up the small stand and he begins to ride his bike away. He hears pounds and unnatural screeching as he huffs in pain, riding quickly away to the forest and he pulls out some salt. Drew sprinkles some salt over his wound, biting his bottom lip and he looks around. He rides through the forest on his bike, hearing the screeches of whatever was chasing him as he jumps off his bike. He lands in the water, staying completely still as he hears the stuttered breathing. The wound on his ankle was getting more painful as the small needles dig into his ankle, biting his bottom lip and he feels his eyelids get heavy before passing out.

Drew wakes up four hours later, groaning softly and he covers his eyes from the bright, yellow light and his head throbs. He glances down at his feet, seeing that his left foot was gone and he gasps. He looks around the room, seeing the white walls that were covered in dust and grime. He takes in a deep breath, struggling against the chains that were around his wrists as the floor was concrete. He groans softly and the headache pounds behind his right eye, leaning against the wall and he coughs softly. Drew glances over to the large iron door that seem keep him caged in, he hears voices outside of the door and he snarls. His body begins to twitch in pain before he blacks out, passing out on the bed and he lays on the bed. Drew feels his body stretching out and his bones breaking, sweat dripping down his body as he feels his red blood start turning into black liquid. He screams out in pain as his skin turns gray, slime begins to form on to his gray skin and needles poke out of his fingerprints. He snarls, his voice box begins to click and swell with pain and he could feel the extreme pain throughout his body. Drew shakes violently as he snaps the chains around his wrists, feeling his muscles expand and he begins to choke on the thick air.

Drew wakes up two hours later, he groans in pain and he stumbles to his feet. His long arms drag across the concrete floor as he sees the open door. Blood splatter on the walls and on the door frame of the iron door, he slams across the door frame and his left arm begins to break. He walks through the narrow hallway, smelling the scent of the delicious humans as he begins to slam against the door.

“Open the door.” Drew says softly, his voice sounds stretched out and broken with random clicks.

“Go away!” A female voice screams back as Drew smashes his slimy fists against the iron door.

Drew looks over as he spots two males with guns, he rushes to them and he grabs one by the throat. The needles in the fingertips jam into the male’s throat and he releases his grip. He feels a blast by the shotgun, he snarls as black liquid squirts all over the male and he begins to screech out. He grips the other’s man face, smashing it into the wall and he growls. Everything seems too dark here even with the lights buzzing in his face, he reaches up and yanks the light out of the ceiling. He rushes to the darkest corner of the basement and his neck begins to twist and turn. He knew that sometime soon, he would have another victim to create another vasper. He thinks to himself lightly, ‘Never leave the basement.’